Showing posts from March, 2011
Show all

March 29, 2011
Aries (3/21 – 4/19): So the other day, I'm test-driving a mountain bike from a store, a new pastime, which is just as fun as snacking on the samples at Costco, but better, because it doesn't involve Costco or the weird snack food.  Anyway, the salesman suggests that I spend a few hours and try two or three bikes, so I'm sort of instantly his fan, because it's the middle of the work day and all.

I pull out my phone to see if I have time, and he gets all, "Sheesh, I hate cell phones.  I only have an old one and I leave it off, and I only check my e-mail once a week."  He went on a huge tear about the ONLY way he wants to be contacted is on the phone.

It reminded me that everyone's gotten so freakin' particular about their means of communication.  I only text.  I never text.  I hate the phone, please e-mail.  I only FB message, please don't call.  And so on.  Everyone is so righteous, sure that their way as the Only Way, which seems a little familia…
3 comments
Read more

March 23, 2011
I sat down next to E. at our big “all hands” meeting, which is the sort of thing that happens every few years when management has something ominous but vague to report.  In this case, the message was, “50 percent of you will be laid off sometime between two weeks and five years from now, and we can’t really be more specific, but we thought it would be helpful if you had that information for your career planning purposes.”

There’s that ‘talk amongst yourselves’ part before the meeting starts, and E. is telling me something, but I notice Vest Lady, several feet ahead of us, starts talking, so I shush E.

I give him the look that I hope says, “There’s material for the blog every single time she opens her mouth,” without saying anything.

E. gets it, and we strain to hear, and even in the few short seconds, we hear the words, “dog”, “coffin”, “cemetery”, and something about her parents.  I know.  I should have sat by her.

The meeting starts about then, and I make a note to track down…
7 comments
Read more

March 19, 2011
Yesterday, I gave our boss a pep talk, because we all agreed that he seems to be off on the grassy knoll, developing theories, like perhaps our jobs are about to be eliminated. Which is totally possible, some might even say plausible, but at this point, he’s just making stuff up, and we’re not for it.

When I enter his office, I find him with his head resting in his hands.  He’s not really the ‘head resting in the hands’ type, and it takes him a while to notice me, so I finally say, “Uh, Baron?  Is everything okay?”

His look is that of someone who has promised a big chunk of money to the mob, and then the other horse won or something, and Guido will be along shortly.  But actually, what caused his morose posture is that he just learned his son got into college.  Do you see what I mean?

“Oh, actually, I just came in to give you a pep talk.”

“Perfect timing! Bring it on. “

I begin….”imagine, if you will, that we’re out…
6 comments
Read more 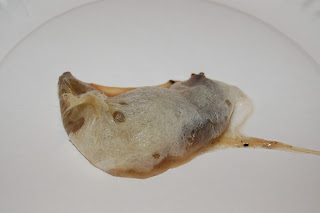 I am writing to ask you some business and marketing advice. I think I've discovered a new animal and wish to profit from my discovery. I looked in my hot tub – one that has been moist and dirty, but not filled, for at least six months. I saw a small creature with beautiful white fluffy fur – about an inch long. I flipped it over to find that it had the body of a slug!

As you can imagine I'm overjoyed with my discovery of fur slugs growing in my own hot tub enclosure!  I am including a photograph.  Unfortunately, this specimen is deceased and the fur got wet when I attempted to remove it. Still, you can imagine how pretty the fur was when it was dry.

What I would like to know from you is:

1) is it legal to patent an animal?
2) do you think this fur best suited for use in knitting or for making fur coats for dolls?
3) how much money should I charge?

I am concerned about poachers so I will just sign,

Oh, it took me a while to reply …
1 comment
Read more

You gotta believe in something.... 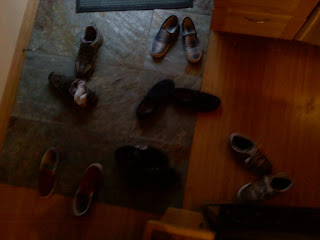 Aries (3/21 – 4/19):  So today B., who's experiencing his first full week back from vacation, gets all testy with the boss, and goes on this big tear about how lame everything is, and the boss does that shifting from one foot to the other thing that means he's uncomfortable but isn't about to do a thing except shift back to the other foot eventually.  It's kind of dramatic when he does it, because he's so tall that even a minor shift, well, when you project that out, it's actually like a skyscraper swaying.

I was laughing pretty hard, because B's tirade was actually quite hilarious, and totally fair, but not very helpful, so I try to coax him back from the edge:

"B, look at the good things, you've got a job, some autonomy, good relationships with your co-workers."  [At this point, J., who believes he's been tossed under the bus by B., gets a squirmy look, but that's a whole 'nother horoscope.]

And B. goes on this rampage,"No…
4 comments
Read more

March 13, 2011
I was honored to be mentioned in this very generous and encouraging post at a nearby blog. Thank you!   It made me wish I could summon a worthy post, but this is the best I can do this rainy evening.


***
This morning, on my way to the Path to Bliss, which, well, full disclosure, I can’t always see it clearly from here, that path.  It’s like a star from a distant planet that I occasionally get a glimpse of, but I’m not even sure I really saw it, or if I did, if it’s real, or if it’s one of those things that burned out 6 million years ago but a bit of light remains, flickering occasionally.

But I could see Joey, who was hitchhiking in the middle of the road, the way he does.  It was 9:30 in the morning and pouring rain.  It’s been a while since I’ve given him a ride, maybe a month or two, so I was sort of relieved to see that he’s okay, but I was also enjoying listening to music and staying in my own head -- I wasn’t in the mood to pick him up.  But I have The Rules, and one of them i…
6 comments
Read more

So I'll write another song about the darkness...

March 09, 2011
Ok, my commitment to you, faithful readers, is to NOT make this blog all about stupid things that happen at Starbucks.  But, I do have one more thing on my mind before I make good on that. Please bear with me.

This morning, I woke up and was barely able to get out of bed, probably because my boss advised that I take two hits of melatonin before going to sleep.  The reason we were even talking about it is because he was on a hilarious little rant about how he went to a sleep clinic that involved him sleeping in a hospital in pajamas with probes on his head, paying something like $3,000 (although insurance picked most of it up), and then being told to take melatonin if he can’t sleep.

I was commenting that I really don’t mind my insomnia, because I spend most of the night in and out of consciousness, listening to podcasts.  The night is like a refreshing cross between a vacation and college.

So I dragged myself out of bed and into the commuting chair, and decided that I should reward my…
4 comments
Read more

The Path to Bliss*

March 02, 2011
I know, I’m just super irritated at everything these days, but sheesh, everyone is so irritating. It’s definitely not me. I’ve taken two out of four steps on my path to bliss, and, um, well… Anyway this all might just be the fallout of being lied to in a pretty diabolical way, but okay, people, how many fucking times have you ordered coffee before?

I go for a little afternoon coffee break yesterday, which is a new bad habit that I’m trying not to form.  I pull into the parking lot and there aren’t any spots, only there is one spot, and it’s like this:
OK, where there should be a picture, there’s not, because I just spent 20 minutes downloading a little drawing program and then trying unsuccessfully to use it, but I’ll go back to what Patrick Hemingway says, a word is worth a thousand pictures. So anyway, the picture would show a full parking lot, and then the last space would be partly taken up by a lame parker who crossed the line, taking up a third of the last space.  That’s what …
6 comments
Read more
More posts