A little rant about the planet, The Leaf, and polyamory.  I just fixed a bunch of random clicky noises.

Polyamory, Bit Coin, and the Nissan

Horoscopes: The Thoughts and Prayers edition

Pisces (2/19 – 3/20): Sometimes when I don't know what to write about, I think back and try to visualize what the pie chart of my thoughts for the last 24 hours would look like.  Many days, it involves bacon, which is kind of weird and possibly a little bit creepy.  But I also think a lot about how the world seems to be going to hell in a bucket and what can I, as one tiny little human, do about it.  Then I get all tired out and think about bacon again --actual and metaphorical.  But let's try the usual things, Pisces: be kind, show up, create. Remember that everyone is struggling in The Big Dark, and there's no harm in holding hands or holding up a light.


Aries (3/21 - 4/19):  Last week I got coffee somewhere and the barista asked my name.  I told her, and she was all, "OMG, I love that name!"  Which sounds fake, because it's sort of a dumb name, and I figured she said that to everyone.  If part of your job is to ask people their name all day, it's nice to gamify it in some way, and there aren't too many options, so I was okay with it.  Saying you love someone's name isn't a terrible way to alleviate boredom.  But she kept going:  "When I was little, I'd always pretend my name was Betsy, and now that I have a child, when we play pretend, I always get to be Betsy."  It seemed way over the top because the name is primarily used for cars and cows and sewing machines.  But she sounded so sincere. Aries, be as sincere as possible this week, and gamify the mundane.  (Which reminds me of my range anxiety, but that's a whole 'nother matter.)

Taurus (4/20 – 5/20):  It feels like we're living in that brain teaser, I don't remember exactly how it goes but there are two villages, one full of liars and one full of truth tellers, and you are allowed to ask one question to figure out which village you're in.  If I had to guess, the liars are in the village that runs the internet, the health care system, the power grid, public lands, and women's uterii.  (Is that the plural form?).  Taurus, be part of the truth-telling village,


Gemini (5/21 - 6/21):  I don't know why they call the people "repairmen" anymore.  I'm thinking they should be called "replacemen" because this is how it goes, every single time:  You wait at home during some assigned time period.  At the very last second of that time period, some 18 year old guy shows up and says, "Oh wow, this is an older model -- what is this, from 2014?  Yeah, it doesn't make any sense to repair it at this point.  We'll have to get you a new (insert giant expensive appliance here).  No worries, we'll get that to you in two weeks!"  From now on, I'm going to gather up all my appliances every three years, throw them directly into the ocean, and buy all new ones. Oh Gemini, I'm so sorry.  That's not a horoscope at all.  In fact, that's a terrible cynical little thought.  My wish for you in this big dark time is that you are the master of your appliances and you laugh out loud at your good fortune every time something works.  May it be so.

Leo (7/23 – 8/22):  There's a local "buy nothing" FB page that has a super sweet feature, "Make a Wish Wednesday", which is one of the highlights of my week.  I should probably be  embarrassed to confess that, but frankly, it's a bit of a relief to say it outloud.  Here's how Make a Wish Wednesday goes:  all the townspeople list their wants, and sometimes, people offer things up.  People ask for string and gravy boats and toys and 2 x 4's.  Recently someone asked for a dollop of glue to fix some eyeglasses.  I've been thinking about that for quite a while now.  It breaks my heart.  I picture someone sitting on the couch, squinting, waving a very tiny little sign, "I NEED GLUE!"  Leo, make your own little sign this week, and wave it boldly.  Make your needs known in a direct and kind way.  The world loves you.  Love it back.

Virgo (8/23 – 9/22): I guess I was thinking about that glue person so much that I dreamed that I met him.  I was on an airplane, and the guy next to me pulled out some broken eyeglasses, and I told him about the glue, and he was like, "That was ME!"  And I was sort of blown away by how able-bodied he was, and yet, his strategy for glue was posting on an obscure FB page.  It was only a dream, Virgo.  This week, nestle into the covers and dream dream dream.  And, as Pete Nelson says, if you can't fly with the birds, at least you can nest with them.  Find a treehouse!


Libra (9/23 – 10/22): I started the podcast because I'm afraid that all I talk about is my dog.  And who wants to be around that?  But jeez, dogs are so excellent.  And this particular dog is so interesting, and she likes all the stuff I enjoy, like walks and bugs and naps and eating.  And the dogs, they never give up.  They are hope at the ready.  They can be laying around on the couch, and then, the instant you make a motion toward the door or the food bowl, BOOM.  High alert, something good is going to happen.  Libra, be hope at the ready yourself this week.  Things could turn around in an instant.  Love the humans and the four-leggeds with all you've got.

Scorpio (10/23 – 11/21): The attention span in Alabama seems to be 10 days. There is a solid movement of people who believe that the earth is flat. You could spend the rest of your life watching long, unedited youtube videos filled with "evidence" of the flat earth.  The flat earthers call the rest of us "globers".  Providing further evidence that we see what we want to see, believe what we want to believe.  So, Scorpio, take that and make something good with it. Also, I want to talk to some flat earthers, if you know any.  I'd like to figure out where it went wrong in their lives.  See how one gets to a place where facts don't matter, and people decide to believe something that was proven wrong centuries ago.  Scorpio, see if you can hook me up.
Sagittarius (11/22 – 12/21): I listened to a podcast about someone who cured his own misery, and it both cracked me up and struck me as a good idea.  He got up each day and tried to focus on how much the world was screwing him over, how he was the victim in every single interaction and situation in his life. He had the opposite of a gratitude journal:  he would write everything down and elaborate on why it was so bad.  He would document that nothing was his fault.  Everyone else was to blame and there wasn't a damn thing he could do about it.  After a few weeks, he tried the reverse:  imagining each person he encountered was a graceful, loving, flawed human, doing their best, with no intention to harm him or anyone else, and he had the capacity to influence his life.  After this experiment, he decided the second way was just way better.  He's never looked back.  Try it!

Capricorn (12/22 - 1/19): One thing that interests me about the whole #MeToo thing is that every single woman I know has been sexually harassed, coerced into sex, or raped; every woman I know lives with some degree of fear that every situation she's in has the potential to lead to violence, unwanted touching, or sex.  A growing pile of men have been accused and many have lost their jobs, but of course, this is merely the tip of the iceberg.  These are only the people who are famous enough, who's accusers are brave enough, who's details are verifiable, and who are famous enough to bother hunting down.  Millions of men are living in fear right now, afraid that their victims will come forward, afraid that their wives and lovers will learn about their transgressions, afraid that their professional reputations will be damaged, afraid that they'll lose their jobs.  I guess that's why we don't hear about men apologizing before they're accused, which makes all of the apologies seem a little hollow.  As if maybe they're only sorry they got called out.  Anyway, Cap, apologize before it's demanded.  It makes the world better.

Aquarius (1/20-2/18):  I went to the Grocery Outlet yesterday, which I usually avoid because it seems horrible and represents what I don't like about the world.  But I was in the neighborhood and I needed batteries and ended up with batteries, a bottle of wine, and a bag of dogfood.  "Birthday?," asked the clerk?  I looked at the items assembled and thought it does look like a pretty good party.  "No, just a regular day."  She repeated herself and I realized that she needed to type in a birthdate to sell me the wine.  I liked it way better when she saw my items and thought, wow, that's a helluva party ahead.  Aquarius, party like you have a bottle of wine, 5 pounds of grain free dog, and two AA batteries.  I dare you.
at December 06, 2017 4 comments: 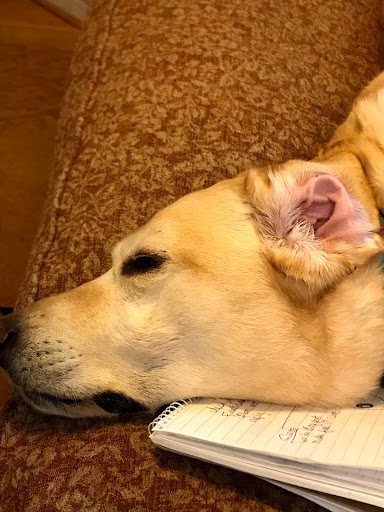