It’s been bleak lately.  Covid deaths are up +1,357% in King County over the past 2 weeks.  Pointless deaths.  It’s been smoky and sweltering and boring and maddening a little scary to think that this is pretty much how the future will be.  Masks and diseases and wildfires and heat waves and pollution keeping us inside and selfish people not rowing along with the rest of us.  Rowing backwards.  But we do what we do, we carry on, but with high irritability. 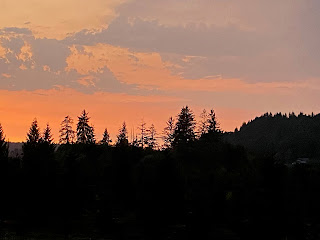 Last week, I thought I’d go to Costco, which has morphed, surprisingly, from a dreaded giant warehouse where I’d get lost and spend too much money, to a fun outing.  This switch happened early in the pandemic when we weren’t supposed to go anywhere.  Of course, we could still shop for food.  Costco was like a free pass to get out of the house.  Anyway, during this miserable week where it’s been too hot to keep the windows closed and too smokey to open them, I remembered about Costco.  Air conditioning! Food!  Diversion!  So I went and it was disappointingly annoying, probably due to my own high irritability but quite possibly due to all the obstructionists who spread themselves out in the aisles, talking to one another and blocking traffic and generally being oblivious.  Families, large extended families forming blockades in each aisle.  But then I noticed that on the far side of the store they were offering samples again! A sign of better days! The olden days, when you could walk through a store and snack on things you didn’t really want but they were FREE!  So I decided that yes, I’d take off my mask when I got there and have a little snack.  This carried me through the whole miserable part with the aisle-blockers and the Search for Washcloths and so on.  Eventually, I would get a little treat.  Ok, I finally get there and guess what they were handing out?  The nice lady in the hair net had little portion cups full of mayonnaise.  Not even a cracker with them.  Straight up mayo.  We made all of this effort to live through the pandemic only to get a dollop of room temperature mayo?  Is this my best life, I wondered?

So I tried to remember the things that always interest me even when I’m feeling lazy, sweltering in place alone with the windows closed and a panting dog.  Twins separated at birth, Jimmy Hoffa (does it seem like it’s been a while since someone’s NJ backyard was excavated to look for a body?) and, my all time fave, D.B. Cooper.

Here’s my recommendation, people:  DB Cooper! There are thousands of people who are truly obsessed, and spend so much time thinking about it, sharing theories and new information.  They know stuff.  Like, one thing they know is that in the 1970’s, the door on a boeing airplane wouldn’t open if the plane was pressurized.  Or maybe depressurized.  I don’t recall.  And they know what diatoms would normally colonize a pile of money near the Columbia River, and what shape their imprint on the bills would be, and how to find the list of serial numbers of the bills that DB was given, and so much more.   This sweet obsessive curiosity that harkens back to a better time, a time when conspiracy theorists were eccentric and harmless, and worried about aliens and sought out bigfoot.  They didn’t try to mess with elections or the health of their communities.  Anyway, my recommendation is DB Cooper.