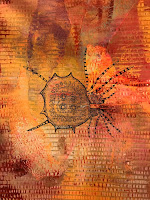 Pisces (2/19 – 3/20):  I saw a person in town a few weeks ago whom I recognized from a Sasquatch tracking website, because I stalk the people who stalk the Big Foot.  If Big Foot were stalking me, it would complete the merry circle of curiosity that makes the world go round.  Anyway, I'm too shy to actually go up and ask him all the questions I have (starting with, "really?"), so I borrowed a book about Big Foot from the library and carried it around prominently, hoping I would bump into him and it would lead to a conversation.  But that didn't happen, and I kept leaving it around, and the good citizens of our town kept returning it to the library, and the librarians, well, I shudder to think what what's going through their heads when they repeatedly returned a book about bigfoot to my shelf. But, my dear Pisces, the point is this:  there are good out there. People who will return your library book.  People who will study mysteries.  People who will stand up for Standing Rock.  Look around and enjoy.

Aries (3/21 - 4/19):  I was "snowed in" for about 24 hours and its made me realize that the last vestiges of upstate NY are disappearing from me.  When I first moved here, I laughed and scoffed at the people who took to their couches the instant snow was mentioned; now I'm one of those people. Even though I had work that I could do from home, I stayed on the couch near the fire and knit a scarf and read my book about trees, because it was a SNOW DAY, knowing all the while that I was being ridiculous.  But what's the point of life if you can't take a snow day once in a while?  Go ahead, do it, Aries.  Knit, read, pull up the blankets.

Taurus (4/20 – 5/20):  It turns out that writing is the opposite of physical exercise -- when you don't move your body for a while, eventually, you just don't feel like it any more.  Legs?  What are these for?  I guess to tuck under my butt when I'm sitting on the couch. I know this from being on bedrest while pregnant.  After a while I was like, yeah, I'm just a big oaf over here.  Feed me.  But writing, it turns out, is like holding your breath.  You eventually just either pass out or you have to write.  Write!  Take a deep breath! Do it, Taurus.


Cancer (6/22 – 7/21): I met someone recently who explained that he had broken his neck in an accident, and while at the hospital, they diagnosed a brain tumor.  "I guess I'm just lucky," he said.  We're all lucky, Cancer.  We're lucky to be born in this amazing beautiful world, full of all different species and the internet and live music.  And dinosaurs with feathers!  Rejoice.

Leo (7/23 – 8/22):  Speaking of corrupt bullshit, now that we know that Russia interfered with the election, why aren't we having a new vote?  It seems so basic.  In the Olympics when they discover doping, don't they take that medal away?  When they discover orange man had help from Putin, well, I honestly think he would be relieved if we took his crown away.  It would give him plenty of angry fuel to tweet about, AND he wouldn't have to show up to those pesky briefings every day.  Win win!  Leo, look for the wins this week.  There will be lots.

Virgo (8/23 – 9/22):  Everyone I know is looking around at the deteriorating democracy and wondering what to do.  Well, here's something: join a parade!  (Bet you didn't see that coming.)  We are committed to putting the fun back in dressing up as vegetables, which has, as you know, become rather a somber affair of late.  All of those surly potatoes, trudging.  No no no!  This will be a festive, musical art parade.  Unprepared?  We can help!

Libra (9/23 – 10/22):  So, it has occurred to me that I do lots of stuff without being particularly good at anything.  Which has it's plusses, to be sure, but I decided I should try to get better at one thing each day.  Today, I thought jeez, I've made roasted chicken a million times, but I don't really know how; I don't have like a trick for it or anything.  So I looked it up and the first thing it said was to truss the chicken.  Then I looked up "truss", and then I tried it.  Libra, before you do this yourself, I'd like to reveal that holding the little legs together and tying them up seems mighty cruel.  The chicken suddenly grabbing the two legs in one hand reminded me of diapering a baby -- you know that motion where you grab the two legs and lift the butt?  Yeah, that's exactly how you truss a chicken.   I couldn't do it and ended up roasting it all sprawled out.  I guess a dead chicken doesn't care much about it's final resting posture, but still.  So much for skills.  But don't give up on skills!


Scorpio (10/23 – 11/21):  Scorpio, I may take a brief break from drawing bugs.   I'm not tired of drawing insects, exactly -- just the legs.  So many legs.  I understand why people of all species gravitate toward drawing the humans, (or fish, which are so pleasantly legless).  I'm still looking for a beetle odalisque but beetles don't have couches.  I know.  Scorpio, this week, enjoy one of the many privileges of being a human:  the couch!

Sagittarius (11/22 – 12/21): Ok, I'm reading the most interesting book and once again, I'm learning that the world is ever so much more complex and interconnected than we thought.  Some of the beautiful things:  trees actually parent their young, in a fashion, by limiting their growth until it's a real possibility to grow up.  And speaking of infant mortality (were we?) the poor tree loses so many children.  Maybe one out of several million survives.  No wonder the willows weep, Sag.

Capricorn (12/22 - 1/19): Remember when computers were new and we were all so excited by the font choices?  We could type letters that were outlined like shadows or looked like script, and everyone printed signs for no apparent reason. Then there were all the forwarded e-mails -- jokes and action items and on and on until we got so damn tired of seeing the same e-mails coming around again and again: the one about the misprinted signs on churches, and the one about the guy who woke up in a bathtub in Chicago without his kidney and a message in lipstick on the mirror -- that one day, without planning, we just stopped forwarding.  Then there was the petition phase, when we thought we could change the world by signing online petitions.  Until we noticed that we signed and signed, but the world didn't change except that we got a bunch more e-mail and requests for money.  Well, guess what, Capricorn?  I'm back to signing petitions.  It's all I can think to do.  And I know it's fruitless.  If a CIA report stating that Russia tipped our election toward Trump doesn't matter, why would a list of names of the outraged make a damn bit of difference?  Should we take to the streets?  As carrots?

Aquarius (1/20-2/18):  I keep waiting (in vain) for the fake news to collide with the actual world, the world where the planet we live on is warming, where CIA is a legitimate agency with real sources, where it's known that vaccines don't cause autism and we actually landed on the moon.  But, we look for what we want to see, I suppose.  When I was in my 20's, living in a group house, one skinny guy was doing a weird fast where he only ate pureed lawnmower castings.  His skin broke out into hideous weeping sores, which seemed to me like a good reason to eat real food, but he saw the puss oozing from his face as evidence that toxins were leaving his body.  (I use my liver for the toxins, personally.)  Anyway, Aquarius, we need more science fairs.  See what you can do.
at December 12, 2016