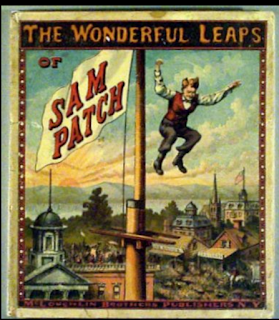 The main thing I've done today is read about Sam Patch.  If you didn’t grow up in NY, you might not know who he is.   I think my entire public school  history curriculum focused on Sam Patch and the Erie Canal.  Is that normal?)

Anyway, Sam Patch was famous for jumping off Niagara Falls (and living!).  And then jumping off the High Falls in the Genessee River.  Before he jumped, he tossed a pet bear cub over the falls.  (Who does that?  Any of it?  Pet bear cub?  Jumping off 99-foot tall waterfalls?)  He eventually died jumping, which is how it goes for people who do risky things.  Drug addicts die from overdoses, mountain climbers die in a crevasse, waterfall jumpers die on the jagged rocks below.

But back to this life, where, as a friend said yesterday, the coming election makes it feel like 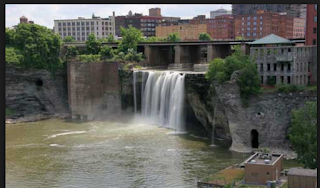 we’re in a boat heading slowly and inevitably toward death by waterfall.

I feel queasy to consider that one angry, narcissistic arrogant man is a hair (a weird orange comb-over hair) away from driving this great country off the cliff.  I can’t think of a damn thing I can do to stop it.  If we were bobbing toward an actual waterfall, I would at least row.  I would row and hope that someone else could get the engine started.  But I don’t know what rowing looks like in this instance.

I’ll vote, of course, but I live in a solidly blue state, and my vote won’t change anything.

I read about Trump:  that he tells more lies than any other politician; that one of his closest advisors resigned after numerous allegations of sexual harassment,  that he’s the defendant in a child rape case, that his ex-wife accused him of rape (but later recanted), that he refuses to release his tax returns, that he's gone bankrupt and not made good on debts.  He spews hatred toward women, people of color, people of Islam, people of different abilities, people from Mexico.  But that doesn’t matter to his mostly white (82% of his supporters), college degree-less (57%), mostly women (!!!! 34% white women, compared to 28% white men) fans.  The facts don’t seem to concern his supporters  – they believe the “lying Hillary” trope, contrary to evidence.  They blame her for covering up her pneumonia, but seem unconcerned about allegations regarding Trump University or his lies about his charitable giving.  For years he demanded Obama’s birth certificate, and now he blames Hillary for starting the whole thing.  Evidence of his lies is well documented, but he continues to surge ahead in the polls.

Trump supporters don’t appear to be motivated by intelligence, reason, or integrity.  I assume there are darker reasons that they’d like to take America back that involve clinging to white heterosexual privilege at the expense of others.

So I’ll leave them out of it, and direct my feeble efforts at rowing away from the abyss toward a tiny group of voters who matter, the Jill Stein contingent.  I know intelligent people of conscience who are planning to vote for Jill, and I, for the life of me, don't understand it.  Given that there is absolutely no way she will win (she currently has less than 5 percent of the vote), I can’t understand why someone would risk turning the country over to Donald Trump.  Unless they’re secretly Trump supporters, hoping he’ll win, but not wanting to own that?  That’s the only reason that makes sense to me.

Voting for Jill is the equivalent of taking your marbles and going home because you’re too good for the two party system, a stance that’s only available to those who are (or at least believe themselves to be) insulated from the angry volatile world that will occur under the creepy "Take America Back" plan.  Maybe you aren’t in the direct line of fire because you’re some combination of wealthy, white, straight, and physically fit.  The stakes feel low to you, because you have an inheritance, a stable (for now) career, or family money.  Guess what?  That’s not integrity.

Integrity is showing up in the real, imperfect world and selecting the best choice from the viable options at hand.  Throwing away your vote because you’re pissed that Bernie didn’t get nominated is the ultimate tantrum, but you’re playing not just with your own marbles; you're risking a lot of other lives as well.  It's saying that the game is too tainted for you to play.  But guess what?  The game goes on without you, and it matters.  The POTUS is one of  the most powerful people on the planet, and people actually died so that we have the right to vote.

Welcome to grownup hood, people.  The game is tainted.  Hillary isn't perfect.  Neither was Bernie, by the way.  In the real, flawed world, all we can do is wake up each day and give it our best shot.  That's what integrity is.  It's choosing between one real thing and another.  We don't get to be ethically pure in this world.  Yes, you might have to steal the medicine.  It may be distasteful; you wish the world were different.  You wish you could vote for a candidate that is perfectly aligned with your values.  But guess what?  That's never going to happen.  That person doesn't exist, just like perfect love or a perfect job.

Even still, there is a real choice.  Let me lay it out:

On the Orlando Night Club shooting:  "If some of those wonderful people had guns strapped right here, right to their waist or right to their ankle," Trump said, patting his hip, "and this son of a b---- comes out and starts shooting and one of the people in that room happened to have (a gun) and goes 'boom, boom.' You know what, that would have been a beautiful, beautiful sight, folks."

On climate change:  Ok, wake up, people.  This is real, and it's happening now, and it's the greatest threat to a bright future for our children and all the other species.  We are leaving the planet in dire straights.  I still wonder where we'd be on climate change if Nader hadn't siphoned votes from Al Gore.  Perhaps there would be more snow on Kilamjaro, perhaps thousands of people wouldn't have died in a war founded on false information about weapons of mass destruction.

In short, Hillary is an experienced attorney who has worked hard to be qualified for the POTUS and works within the system.  Trump is a TV personality with a volatile temper who could care less about playing well with others.

If you don't care if Trump wins, go ahead and vote for Jill.  But please don't judge the rest of us for trying our damnedest to live in the real world, making real choices that will affect the future of the planet.  You don't get to call it integrity to check out of the game.